The fourth in this years planned Open Apiary sessions took place at the New Association Apiary in Saunderton. There were 13 attendees at this session (11 ‘learners/improver’s’ plus 2 of us demonstrating).

But all was not lost. We had a session with the imaginatively named ‘hive a’ and ‘hive b’ to look at the reasons for carrying out an artificial swarm and how this is actually done (something we all struggle with sometimes I am sure).

This sparked a  lively debate and discussion  (in between nipping under the trees for shelter) ranging from other methods of swarm control (the Snelgrove board was discussed) to reasons for feeding, what to feed, when and how to make up fondant (thanks to Olwyn for the info).

Despite the conditions everybody seemed to enjoy the session and take something away from it.

We ended the day with a quick strim of some of the fast growing weeds in the apiary, and a few minutes litter picking across the site. 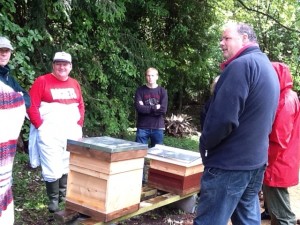 The imaginatively named 'hive a' and 'hive b'

This was the third in this years planned Open Apiary sessions take place at the New Association Apiary in Saunderton. Six attendees came along to work with the Apiary Manager Bob Grayston on a day that started off a bit windy and overcast, but ended up bright and sunny and 16 degrees.

First there were some general duties, making up additional super frames and flaming out equipment for future use.

Hive 5 was opened, which had recently made the trip from the Old Marlow Apiary. Wow! the bees were looking good,  having recently been ‘shook swarmed’ onto all new foundation about 5 weeks ago. In this time they had pulled 10 frames of 14 x 12 foundation, filled it with brood, and filled a full super to bursting point, including 3 frames that are fully sealed. Busy bees indeed!

This was the first inspection of this hive since the move, and it was noticed that some of the brood frames had shifted in the move and a triangular gap of about an inch and a half had ensued, which the bees had made a nicely tailored piece of brace come to fill.

Participants then took turns marking and clipping ‘queens’ which was very exciting at times. The session ended back at the ‘container’ with discussions about what we had seen and done, and freshly made cakes for all

This was the First in this years planned Open Apiary sessions and the first to take place at the New Association Apiary in Saunderton on a pleasant afternoon. There were 5 attendees at this session.

We started off with a bit of a smoker master class where people could try a variety of different smoker fuels to see how hard or easy they were to get started with matches (no blow lamps here…) and maintain. We tried wood chips, pre made cardboard cartridges, toilet roll tubes, egg boxes, hessian sacking and compressed cotton waste – plus various combinations of them.

Once we had decided on our preferred fuel and had a brace of working smokers we concentrated on transferring 2 hives purchased from a member from the smith boxes they were in into National boxes. Both queens were seen and had clipped wings. 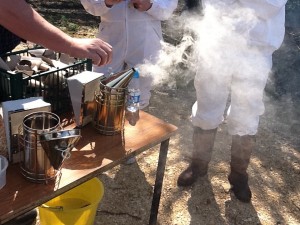 ... and as per usual, the smoke follows you!