High Wycombe and District Beekeeping Association was founded in 1944.  The inaugural meeting was held on 17th March at Sherriff’s Cafe, High Wycombe with twenty-four people present including Mr Horace Tweedie, the county expert.  A committee of seven people was elected and the subscription was set at five shillings which included foul brood insurance.  After the meeting Mr. Tweedie gave a lecture on foul brood accompanied by lantern slides.

Mr. Tweedie, aka “Tweediebee” the county expert, was an important figure in Buckinghamshire beekeeping.   He was in demand as a speaker because in the following April he lectured to the newly formed Slough & District Beekeepers’ Society. Born in Worcester in 1895, by the age of fifteen he was living in lodgings in Droitwich and working as a poor law clerk.  In 1924 he married Dora Pickin , and together they were a formidable force for beekeeping in Buckinghamshire:  Dora was County Secretary for many years, and liked to ride around the county on a motor cycle combination.  Both husband and wife were heavily involved with the BBKA.   The “Tweedie Trophy”  is named in their memory.  Dora died in 1976 and Horace in 1979. 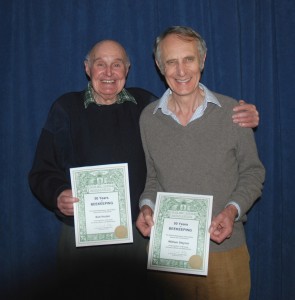 Bob and Will with their 50 years certificates

Getting more up-to-date,  two of our members have each achieved fifty years of beekeeping.  Bob Hunter and Will Steynor were presented with certificates from the BBKA to mark this prestigious milestone at the annual bucks seminar.  Will told the meeting how he had started beekeeping by persuading his school woodwork teacher to let him build a beehive, and over the years he turned his hobby into a small business.  Bob started beekeeping as a hobby and eventually took a job as an official foul brood inspector.  Both men are looking forward to many more years of productive beekeeping.

If you need any help with the site, please contact webmaster